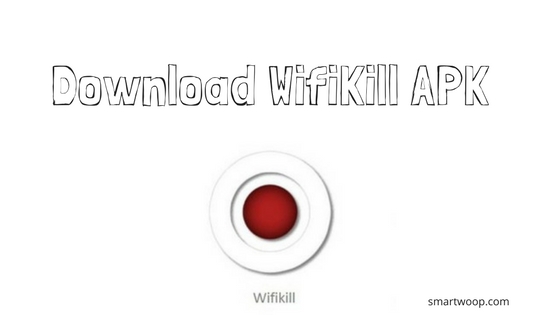 Download WifiKill APK,  and it let you use high speed internet by disconnecting others from the same wifi network, in other words, you can hack a wifi network without leaving your footprint. Sounds cool right?. So, when you are selfish about getting high internet speed, and others are busy for same. You can shut down other wifi users using WifiKill. All you need to download latest WifiKill APK version, and install in on your device and start getting high speed internet by disconnecting others connections.

In this post we will cover everything that you need to know about Wifikill, also will walk you through how to download and install WifiKill on your smartphone, and PC and more.

What is WifiKill App?

After the successful download of WifiKill Apk and installing it on your device. Your mobile act as Wifi router to the network you are connected. And, it gives you all the power that the admin of wifi router has. This is how, you can modify, and delete the users connected to the same wifi networks. Moreover, when you cut others users connections, you can grab the highest bandwidth speed. This application unblocks everything of the wifi networks that you are on right now and hack into it easily.

Here you will find latest APK version of WifiKill wifi networks killing apps. This is last updated latest version of this app, you can download it easily by clicking the link below. But, before that, have a look into this version info.

How To Install Wifikill Apk On Android?

How to Use WifiKill APK?

How To Download and Install WifiKill APK For PC?

Yes, you can use WifiKill on your PC too. But, there is no official version is available for PC, so you need to access this app through an android emulator on your PC. Here is how you can do this.

If wifikill is working on your device, or you just don’t want to root your device. Then you going with apps similar to Wifikill is a good option for you. Below we have given some best apps like WifiKill.

Many users are facing this problem Wifikill is not working, mostly this problem occurs if your device is not rooted properly, please check your rooting status using root checker app and re-root your device if needed.

You can use wifi protector apps such as Wifi APR guard, which will not let other to hack your own wifi network.

The app is not illegal to use, but you should use it for good uses. Using this app with bad intention might be risky for you.

Yes, it can be detected using some tricks. But, normal users don’t get any notification of tracking WifiKill for disconnecting wifi networks. However,  there are many tricks available to detect WifiKill.

Yes, you can use Wifikill on MacBook. However, it’s not officially available for Mac users, but using android emulators one can use it on MacBook.

Following the above process easily you can download and install WifiKill APK on Android and On PC. However, this app is highly capable to hack wifi networks using a smartphone, we recommend to use it wisely, only when its necessary to use. Don’t interrupt any important wifi networks like office work for fun. Enjoy and have fun using WifiKill.