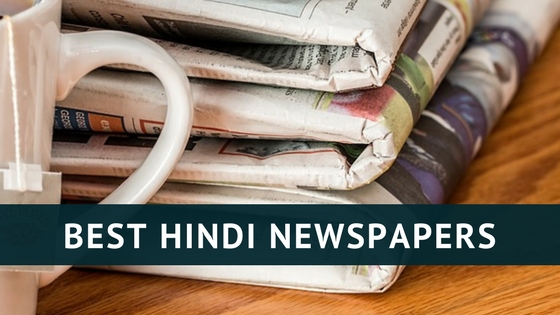 Hindi newspapers are very useful for those who want to keep them updated with the latest news updates in Hindi. Nowadays these regional newspapers provide the ability to read news online without actually paying for it. Hence it becomes very easy for the readers to get updated with the national and international news related to politics, business, crime, corruption, sports, technology, health, movies, and entertainment. Today, we have come up with some most popular Indian newspapers that give daily news updates via their e portals.

In this article, we have shown the 17 best Hindi newspapers list which will allow the users with latest Hindi news from all around the world. And most importantly, smartphone users do not need to carry newspapers anymore. They can simply browse and read all the news from the eNewspapers available on the web. So for now, let’s get started with the list of popular newspapers in India.

There are hundreds of Hindi newspapers available in India. Some are national, while some are regional. But here, we have listed out only those newspapers that can provide all the national, regional, and also international news in Hindi. Not only this, all the newspapers have their own ePapers. So choose the newspapers according to your need and start reading.

If you are interested to read news on north east and tripura, brower https://dainiksambad.in, which is the most popular newspaper of Tripura.

Dainik Jagran is the best Hindi newspapers in India, with largest readership and circulation. Since 1942, it has started its journey to represent the voice of free India. And with the passage of time, Dainik Jagran has been presenting the truth before the public honestly and responsibly. That is why, today, it has a readership of 5.59 Crores (approximately 56 million) per day, covering 11 states of India, with 37 different editions. The Dainik Jagran has been voted as the largest read daily in the world and the most credible source of news by World Association of Newspapers and by BBC-Reuter survey team respectively.

After Dainik Jagran, the next name that comes as the largest circulated and the fastest growing Hindi newspapers is the Dainik Bhaskar, founded by D B Corp Ltd and headquartered in Bhopal, Madhya Pradesh. Because of its credibility, today, it has been circulated in 14 states of India including Delhi, Rajasthan, Haryana, Uttar Pradesh, Punjab, Jharkhand, Bihar, Uttarakhand, and Jammu & Kashmir. It has some special editions like Muzaffarpur, Bhagalpur, and Gaya editions which have helped it to gain popularity in those regions and to increase readership. In Jan – Jun 2017, it has recorded circulation of 3,758,949 copies daily. 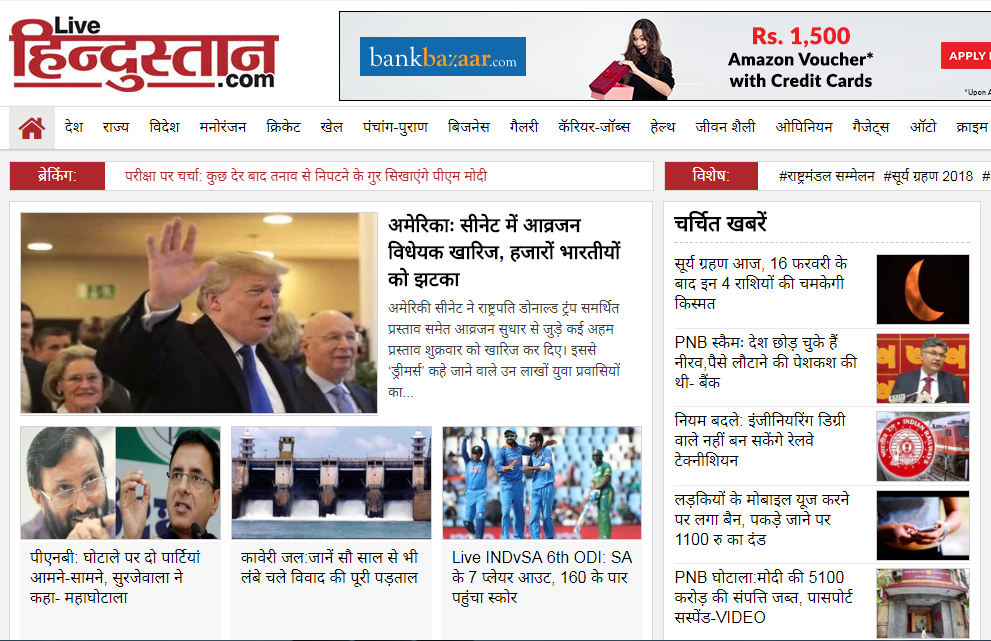 With the motto “to become the partner of progress for the youth”, the Hindustan Dainik has started its journey in 1936. It is the fifth-largest circulated newspaper and second in readership in India. It has been circulated in almost all parts of central India, including Delhi, Haryana, Bihar, Jharkhand, Uttar Pradesh and Uttarakhand. It provides Hindi news related to politics, business, employment, sports, education, health, science and technology, entertainment, and lifestyle. In January 2016 to Jun 2016, it has recorded circulation of approximately 24 Lac (2.4 million) copies daily and in 2017, it has recorded more than 27 Lac.

The Economic Times is the world’s 2nd largest read business newspaper with approximately 800,000 readerships. It generally provides English news related to economics, markets, industries, stock exchange news, showbiz news, and finance. The owner and publisher, the Bennett, Coleman & Co Ltd, of The Economic Times also publishes Hindi business news from various parts of the country including Mumbai, Bangalore, Delhi, Kolkata, Chennai, Lucknow, Chandigarh, Nagpur, Pune, Jaipur, Hyderabad, and Ahmedabad. According to the publisher, the circulation of this newspaper was 377,789 copies per day during January – June 2017.

Amar Ujala, Owned by Amar Ujala Publications Ltd, is one of the most popular broadsheet newspapers in India. In 2017, it has been declared as the 5th largest circulated newspaper India and 7th by readership. In July – December 2016 and January – June 2017, it has recorded circulations of more than 29 Lac and 26 Lac respectively. Today, Amar Ujala is being circulated in Uttarakhand, Himachal Pradesh, Jammu, Haryana, Punjab, Delhi NCR, Uttar Pradesh, and in one Union Territory, Chandigarh. This hindi newspaper generally provides Hindi news related to politics, business, sports, employment, technology, entertainment, society, and lifestyle.

The 5th best Hindi newspaper in the list is the Rajasthan Patrika, published as “Patrika” in some states. It has been founded by Rajasthan Patrika Pvt Ltd in the year 1956. Since then it has been upbringing the truth for the people and became one of the most popular newspaper in Rajasthan. Later it has launched its various editions in other parts of India including New Delhi, Chhattisgarh, Gujarat, Karnataka, Madhya Pradesh, and Tamil Nadu. In 2017, the rate of circulation of Rajasthan Patrika is 1,813,756 daily, making it the 5th top circulated newspaper in India and 6th in readership. It has two bi-monthly Hindi magazines for children called “Balhans” and “Chotu – Motu”.

Nava Bharat is one of the top 10 Hindi broadsheet newspapers in India. It is owned by Ram Gopal Investments Pvt. Ltd. It has three headquarters in Bhopal, Nagpur, and Raipur. The Nava Bharat Group, the publisher of the Nava Bharat, publishes 6 variant editions available in Madhya Pradesh & Maharashtra and 2 editions in Chhattisgarh. The different editions are available in Bhopal, Gwalior, Jabalpur, Indore, Satna, Chhindwara, Nagpur, Mumbai, Pune, Nasik, Amravati, Raipur, Bilaspur, Amravati, and Chandrapur. Apart from the newspaper, Nava Bharat has provided two eNewspaper portals. They are http://navabharat.co.in/ & http://navabharat.org/.

Parichay Times is totally new in comparison to other popular hindi newspapers, but it has the potentiality that has made it popular among others. According to the Indian Readership Survey (IRS), Parichay Times is the 20th best newspaper in India with more than 150,000 readerships. In case of circulation, it has also achieved the goal to increase the number. Today Parichay Times circulates 43000+ copies in and around Delhi, Uttar Pradesh, Haryana, Madhya Pradesh, Uttrakhand, Punjab, and Chhattisgarh. There are some sub-editions available in Gurgaon, Noida, Faridabad, and Ghaziabad. Apart from the website, Parichay Times has provided an ePaper portal at http://parichaytimes.com/.

NavBharat Times, in short NBT, is one of the most read newspapers in India, owned and published by the Bennett, Coleman & Co Ltd. It is a Hindi newspaper with the highest circulation rate in Delhi, Mumbai, and Lucknow. The publisher circulates more than 4 Lac copies in Delhi and Approximately 130000+ copies in Mumbai. According to the Indian Readership Survey, NBT has 1970000 and 470000 readerships in Delhi and Mumbai respectively. NavBharat Times has sister newspaper including The Times of India, The Economic Times, Maharashtra Times, Ei Samay, and Vijaya Karnataka and Magazines like Femina and Filmfare.

iNext Live is a sister concern of India’s top Hindi newspaper Dainik Jagran. It was founded in 2006 by the Jagaran Prakashan Ltd, headquartered in Kanpur. It is also one of the best broadsheet daily newspapers in India. Like others, it covers news related to politics, corruption, business, industry, sports, crime, entertainment, health, and technology. For providing fastest circulation of the newspaper, it uses to publish its copies from four different states like Uttar Pradesh, Uttarakhand, Bihar, and Jharkhand. Along with the quality news, iNext Live has launched various events to inspire the youngsters through successful campaigns like Bikeathon and Health Meter.

A Newspaper that is dedicated to bringing the truth under lights as well as to uphold the Indian culture and heritage is the Uttam Hindu. It is a broadsheet Hindi newspaper available in various parts of in India including Delhi, Punjab, Haryana, and Himachal Pradesh. It is one of the largest read newspapers in these regions. The newspaper has different editions such as Punjab Edition, Delhi Edition, Haryana Edition and Himachal Edition. Along with these, it has three different magazines too. They are “Daily Magazine”, “Sunday Special Magazine”, and “Daily Uttam Hindu” for updates of films, TV serials, sports, and other means of entertainment. The Uttam Hindu ePaper is also available. 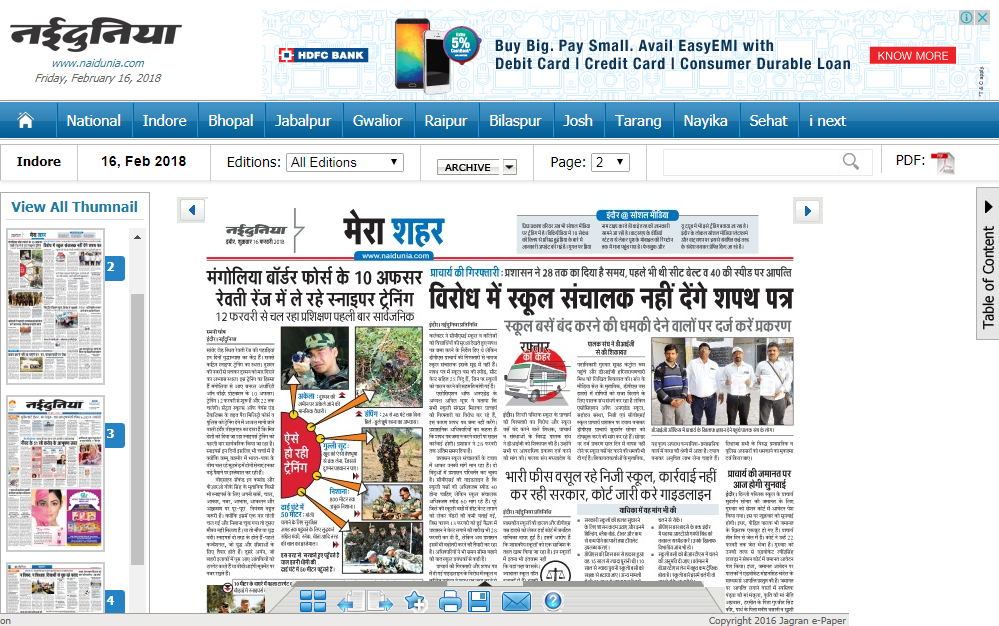 Like Dainik Jagran and iNext Live, Nai Dunia is also owned by the Jagran Prakashan Ltd, in short JPL. It provides national news in almost all parts of Madhya Pradesh and Chhattisgarh including cities like Indore, Gwalior, Bhopal, Raipur, Jabalpur, and Bilaspur. Apart from these, it is available in Rajasthan, Gujarat, Maharashtra, and Delhi-NCR. There are different editions available for these regions. Apart from these, it has 4 different editions like “Josh”, “Tarang”, “Nayika”, and “Sehat”. News related to Politics, Business, technology, sports, corruption, entertainment, and health are covered by Nai Dunia. 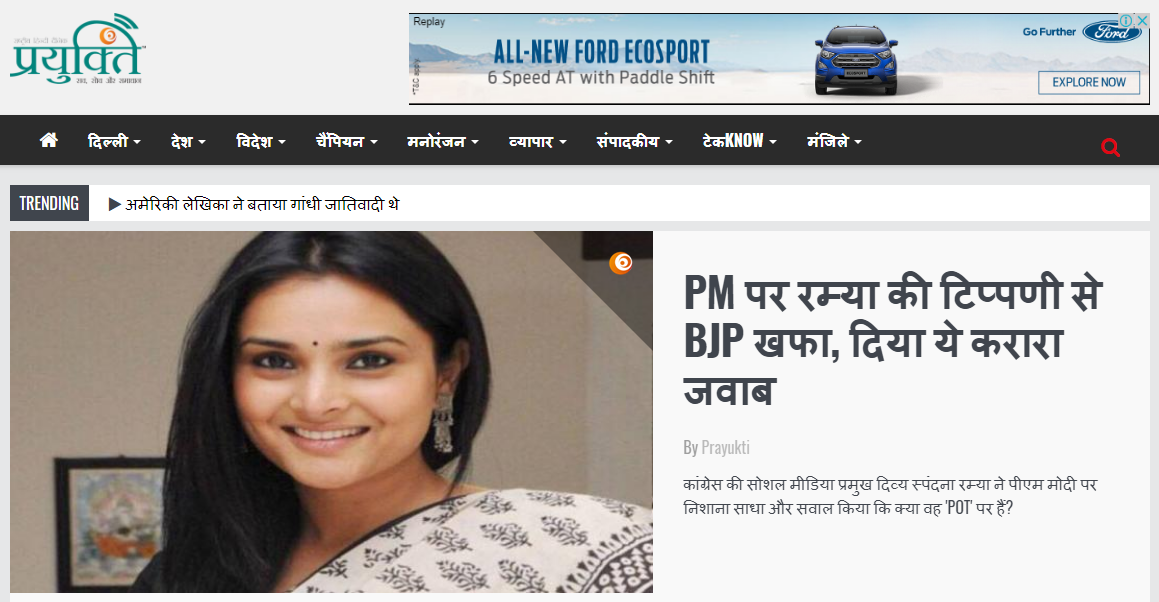 According to the Indian Readership Survey, Dainik Prayukti is one of the leading Hindi newspapers in India, providing news in broadsheet format. It is also one of the fastest growing newspapers in India, launched by the Prayukti Group on 11 May 2016. The daily newspaper is being published from Delhi, Uttar Pradesh, Haryana, Hyderabad, Bangalore, and Chennai. All national and international news related to world politics – Indian politics, Crime – Corruption, Sports – Entertainment, Science – Technology, and Health – Lifestyle. Along with the news, a weekly edition called “Fun Day” provides articles related to Lifestyle, Food, Fashion, Family, Travel, and Entertainment. Readers can read all editions of news on ePortal of Dainik Prayukti. 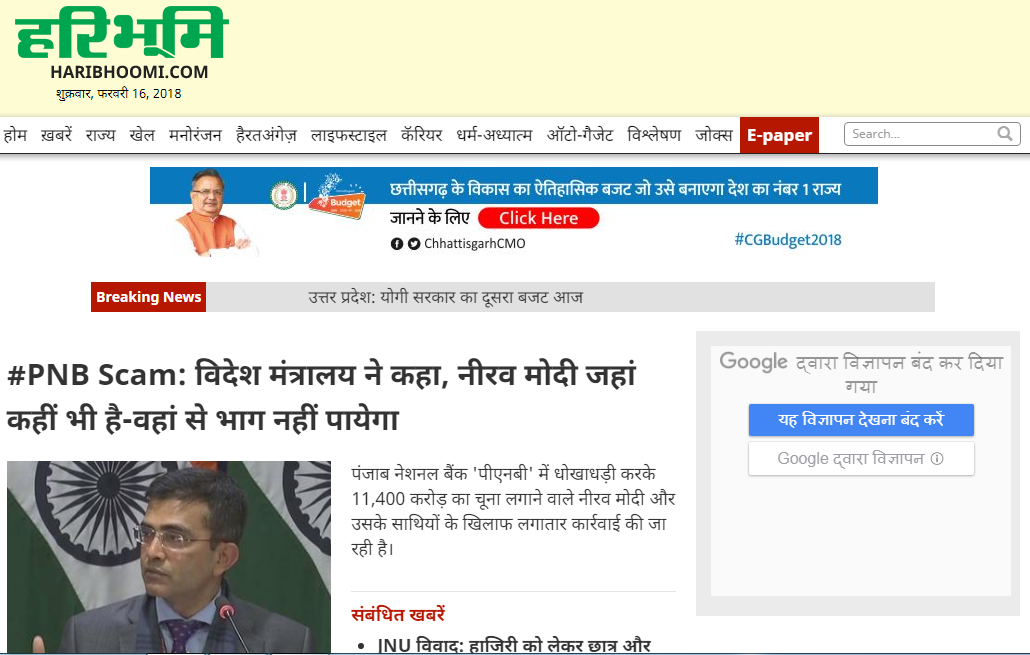 In North and Central part of India, among the most popular Hindi newspapers in Hari Bhoomi, founded in 1996. Initially, it was a weekly newspaper. In 1997, it has launched its daily edition. Today, it has been spread over Haryana, Delhi – NCR, Chhattisgarh, and Madhya Pradesh. In Chhattisgarh, Hari Bhoomi is the largest circulated newspaper, circulating more than 4 Lac copies per day. In all regions, the number of circulated copies is more than 10 Lac. According to Indian Readership Survey 2014, Hari Bhoomi is the 9th largest Hindi daily in India, in terms of readership. Other editions are Saheli, BalBhoomi, Mazil, Ravivar Bharti, Rangarang, and Choupal. Click here to read different editions of Hari Bhoomi on eNews Portal. 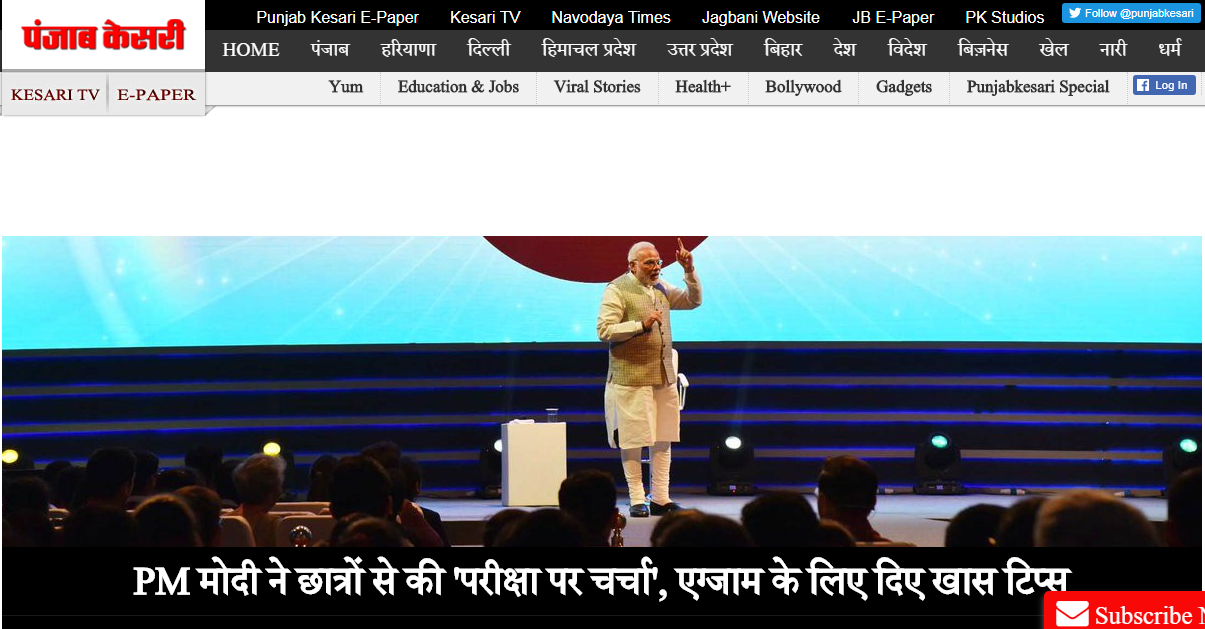 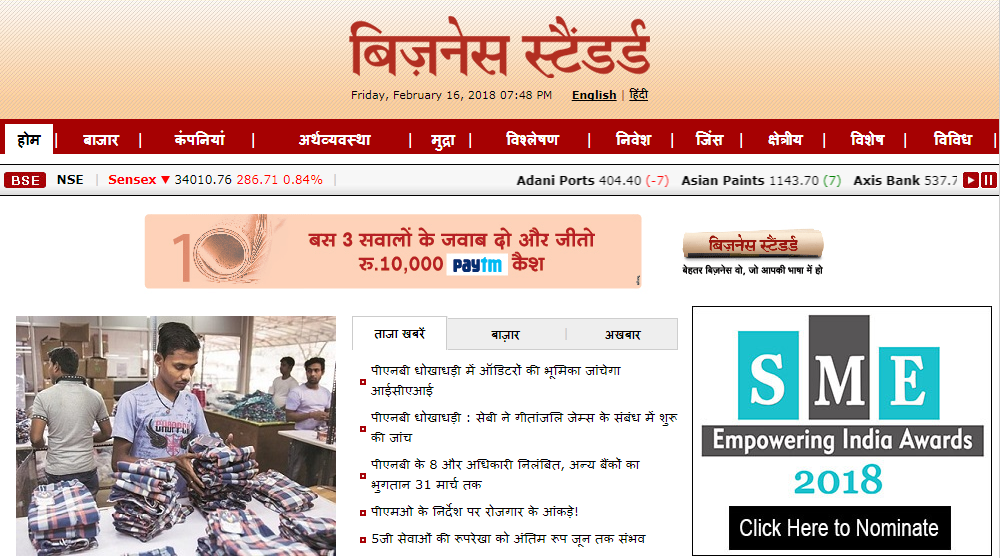 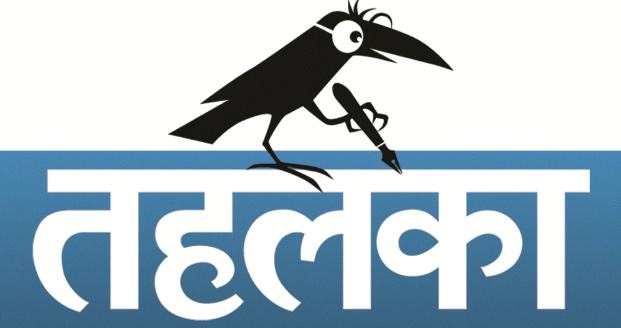 The Indian news hindi magazine that is known for its investigative journalism and sting operations is the Tehelka. It was founded by Aniruddha Bahal and Tarun Tejpal in 2000 as a website. But later in 2004, it has started providing tabloid format newspaper. It provides national and international news, business news, investigations, economy and environment. In few years of journalism, Tehelka has achieved fame by revealing truths behind the cricket match-fixing scandal (2000), Operation West End (2001), and 2002 Gujarat Riots. It has achieved many awards including International Press Institute India Awards for Excellence in Journalism in 2010 and 2011. Since 2007, it is being published as a magazine. The English version is available.

So choose the best option from the 17 best Hindi newspapers list. All these sites will provide the latest Hindi news related to national and international politics, crime and corruption, business and economy, sports and entertainment, and also science and technology. All you need to browse the eNews Portals and read the daily news updates for absolutely free.